Hey, hey … it’s that time of the week again!  Time to pull out the ole’ white board and write out what we are looking to eat for the week ahead!


First, a little update on the Pantry / Freezer Challenge … it’s still going strong! The freezers are really starting to show great improvement and the pantry as well … being that we are aiming to put the house on the market in the next week or so, it’s rather important that I get the three freezers eaten down since I most likely will NOT have three when we move!


There was a little shopping done this week … I spent about $40 at Whole Foods on Friday (wings @ $3.99/pound, apples (ahem, $4.29/pound!), beer-which is NOT part of the food budget) and peppers. Hubby stopped at Aldis (spent $10) and Winn Dixie on Saturday ($30) so around $80 was spent this week … BUT sadly, $25 or so was beer related since we’ve discovered the new Samuel Adams Cherry Wheat … O M G! $9.99 a 6 pack so it’s in the pricey range for beer but Hubby loves the stuff and hey, I’ll take that over Jack or Titos any day 😉 So technically, the food budget is under control for the past week!


I did a little food prep on Sunday … boiled a dozen eggs (hey, 99 cents at Aldi for a dozen!), which were then turned in to deviled eggs so that’s not really food prep since we ate most of them! I wanted to rice a head of cauliflower, and prep the head of iceberg lettuce, but I only chopped and sliced up some onions and peppers (for later in the week). There were a few other things I wanted to get done but dang, it was cold IN the house and I just wanted to snuggle under my fuzzy blanket all afternoon!


We are having the kids and a few of their friends over for the game this evening … Panthers or Broncos? I don’t know! Hubby pulled some brats out of the freezer and used the sauerkraut I had in the freezer to make his dish. Hubby made onion dip … just because. I will also heat up the leftover wings from Whole Foods from Friday ($3.99 a pound, cooked! Deal!). We will also cook a couple of hot dogs for the Boy who is not a fan of bratwurst … and I also cut up some cheese and sliced a roll of summer sausage (picked up last week for $3 at Walmart) and of course, Cherry Wheat, Original Sin Pear Cider (me if I want to stay gluten free for the day, we’ll see) and Yuengling for those youngsters that don’t like flavored craft beers! 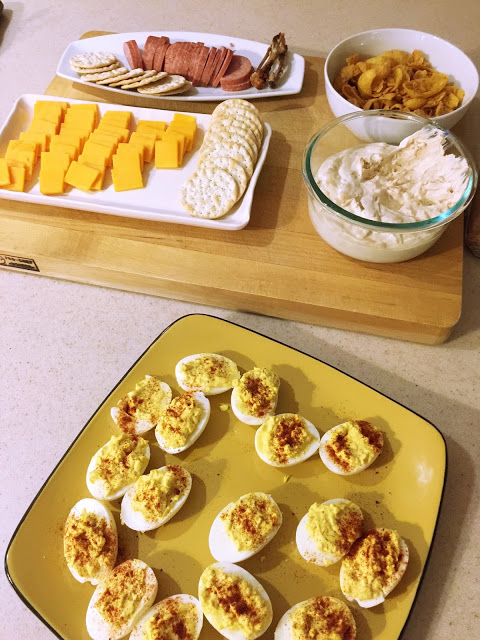 Wings and Brats were still in oven

Here’s what we are looking at for the week ahead:


Sunday – see above … should be plenty of food!


Monday – Soup as it’s going to be chilly this week! I’m wanting to try a Paleo Zuppa Toscana since I have everything in the freezer and pantry (will use spinach instead of kale) … fingers crossed the recipe is good and if so, will share!


Tuesday – Taco Tuesday (surprise!) … I may need to get some tomatoes but everything else is on hand

Wednesday- Leftovers (there should be some!)


Thursday – Chicken Pizza – Sort Of (all in freezers and fridge)

Friday – Italian Sausage and Peppers in the Instant Pot … new recipe that I’m excited to try! Sausage from freezer, peppers were picked up at Whole Foods last Friday

Saturday – Valentine’s Day! I’ve got a girlfriend that is trying to get all of us girls out again for a birthday celebration but I’m like, it’s a day that I’d prefer to spend with my Hubby … we go through this every year 😦  I’m going to let Hubby choose the dinner and I will make these 😉 I’ve got a stash of good chocolate in the pantry for this treat specifically!

Not really an exciting week ahead, but a few goodies are going to be consumed!!